How to Block Game Requests |…

How to undo sent mail in…

How to save android battery life…

How to remove notifications from chrome…

How to hide taskbar windows 10…

How to get Netflix for free… 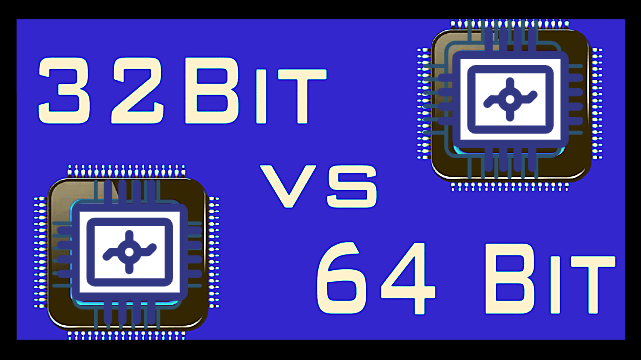 In this article, I will explain which is best among Windows 32 bit or 64 bit and also the difference between windows 32 bit and 64 bit.

Today in this article you will know the actual difference between 32-bit and 64-bit operating systems. And also why you have to select Windows 64-bit over a 32-bit version.

Before going into the topic lets us discuss a few things. According to Wikipedia  “A bit is a basic unit of information in computing and digital communications”.A bit can have only one of two values, and may therefore be physically implemented with a two-state device. These values are most commonly described as either a 0 or 1. A computer saves your data in a collection of such bits called a byte.8-bits make up a byte.

The number of bits in a processor applies to the size of the data types that it manages and the size of its registry.

Difference between windows 32 bit and 64 bit.

A processor or CPU includes a number of registers and logic circuits. And the capacity of registers in 32-bit (x86) CPU is 32-bit and the same for 64-bit (x64).

In any 32-bit operating system, you can only use up to 4 GB of RAM simply because the size of a 32-bit value will not allow any more.😥 And if you want to really use all of that RAM that you installed, you’ll need to install Windows 64-bit version.😋

Assume that you have 4 GB RAM and the 32-bit version is sufficient for you then think twice because your devices, like your video card and motherboard BIOS, take up 4 GB space, which indicates that the operating system gets access to even smaller of your RAM.

Windows specialist Mark Russinovich found that a desktop operating with 32-bit Windows with 4 GB of RAM and two 1 GB video cards only had 2.2 GB of RAM free for the operating system. So the higher and more reliable video cards get, the less of that 4 GB will be available on a 32-bit system.

More RAM means that you can immediately switch between the various applications. So 64-bit version of Windows has more multitasking features than the 32-bit.🥰

However, almost all the latest PC/laptops come with 64-bit processors and you’ll have to install a 64-bit OS on your computer to take full advantage of this 64-bit CPU.

Windows 64-bit OS arrives with a technology that blocks hijacking. The kernel -means prevent unsupported changes to the kernel of the Windows OS. Along with support for hardware-enabled data execution protection, and mandatory digitally signed 64-bit device drivers.

The only disadvantage of the Windows 64-bit version is the shortage of availability of 64-bit software. But the vast majority of 32-bit applications will continue to work just fine on 64-bit Windows. Which involves the compatibility layer called WoW64.

This is all about which is best among Windows 32 bit or 64 bit. And also the difference between windows 32 bit and 64 bit.

Thanks for your support we will provide more tricks & tips for you. If you like our tricks, share these with your friends and join my Telegram Channel for more new tricks & tips.

Join Into My Telegram Channel

How To Get Free Virtual Phone Number For OTP

How to Create Unlimited Gmail Accounts for free

How to send WhatsApp message without Saving a...

How to Block Game Requests | How to block Facebook game requests